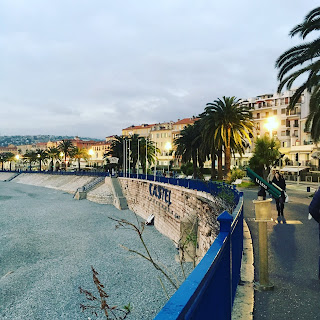 We missed a symposium at our church last month titled, "Where do you call home?"  A fitting title for this blended community.  The panel included newspaper reporters and long stay residents from along the coast - some of whom have lived here over 20 years.  Are they still British? or Spanish? or Iranian? or Australian?  Since the 1700s, the Côte d'Azur has drawn visitors that turn into residents from all over the world. 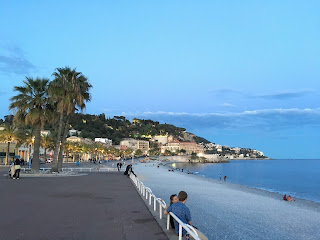 By the 1750s, the British began visiting Nice in the winters. The Promenade des Anglais, the 6 mile stretch of sidewalk from the airport to the Port, was built in the late 1800s with British money to spur a depressed Niçoise economy.  Our church, Holy Trinity Nice, has been a hub of the British community here for over a century.

The Russian nobility began to visit Nice during the mid 1900s following the English upper class in order to take advantage of the mild winter climate.  You can see evidence of their continual presence with domed buildings dotting the skyline, a Russian orthodox cathedral, and cyrillic lettered signs.

The Côte d'Azur boasts museums celebrating Russian(Chagall) and Spanish(Picasso and Miró) artists. Great art patrons like Aime Maeght and Beatrice Eprussi Rothschild nurtured artists here and celebrated their gifts.  Antibes was where Picasso could begin to recover from World War II and create again.  Matisse healed from cancer surgery and found a new way to create, moving from paint to paper cut outs. There can be no doubt that this small piece of the world inspires. 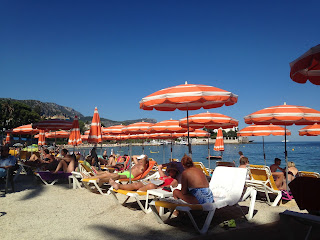 From St. Jean Cap Ferrat and Monaco to St Tropez, villas and small palaces dot the landscape.  But the community stretches beyond just the rich and famous.  We have been part of one of the most blended communities on Earth.  Within 10 blocks of our apartment there are Indian, Afghani, Tunisian, Greek, Thai, Japanese, Chinese, Italian, French and Niçoise restaurants.  Menus are in several languages.  The park is filled with women in headdresses and saris alongside French parents in the latest fashions.  Children play kicking balls, swinging on swing sets and running through the splash pad.   And you hear French, Spanish, Italian, and English all being spoken. 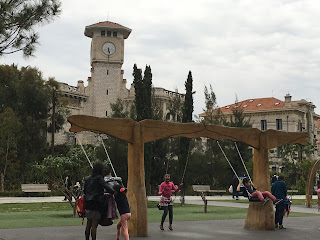 We have learned to walk...and walk...and walk.. and check out the blue Velo city bikes...and ride buses...and walk.  I love walking out of the apartment at any time of day or night and there are people in the park, on the street, out to dinner.  The Niçoise live a communal life in their shared public spaces.  A day doesn't go by that we don't see babies in strollers, French bulldogs pulling at their leashes, elderly women visiting on park benches, and children running in various states of undress through the fountains.  The suburban house with a big yard and car is so nice- but very lonely compared to this group experience. 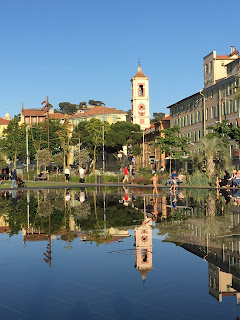 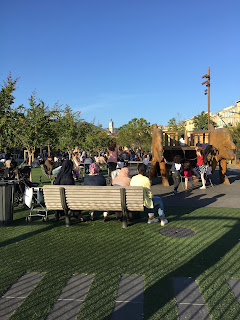 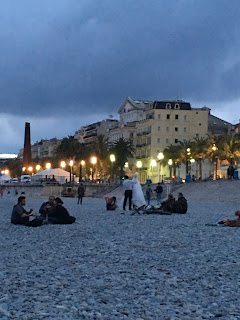 Hopefully, we have learned lots from our time here, but we will also appreciate certain aspects of our American life when we get back.  We have made a few friends- the guys at the bakery downstairs, Clement who sells me flowers in the Marche aux Fleurs, Father Peter, the Dexters, and lots of familiar faces at church, Max, Julian and Christine our new German sailing friends, Arianne at Univela Sailing Hostel, Jean Michel the landlord(who Pete says is the French Bernie Sanders), Nicolas and Alice at Club Nautique, even the teenager upstairs with the hookah pipe.

My family has had the biggest gift of all---Time to talk, discuss, eat, learn, sleep, and grow-both physically(Pete has grown 4 inches this spring) and mentally.

Our world has gotten bigger and just like we were homesick when we first got to France, I think we will be France-sick when we get home.  That is the problem with expanding your world- and the great part about it.  You will always miss somewhere because you have grown to love more of this world God gave us.

So- no- we do not call this home but the time we shared here was precious.

Posted by Elizabeth McGriff at 10:21 PM